Like all its peer companies Eastman Chemical Company has experienced CUI of both stainless steel and carbon steel equipment.  Recently Eastman began a program of CUI-related inspections and repairs to extend the life of several critical assets that operate under conditions that are conducive to CUI.  Previous experience suggested that CUI was likely with an elevated temperature distillation column made of carbon steel. The column has been in service since the early 1980’s with an operating temperature that varies from about 100°C at the base to 80°C at the top.  Operating requirements prevented shutdown of the column so all coating and insulation work was completed while the column was in operation and the external surface was hot.  When new, the equipment was painted with a red iron oxide primer and insulated with two inches of fiberglass blanket insulation.  After more than 30 years of operation in an exposed outdoor location the insulation was removed to permit a thorough external inspection, found damage was repaired and a protective coating system and new thermal insulation was installed.

As expected, when the old insulation was removed, corrosion of the steel substrate was found.  It is very difficult to prevent the ingress of water through an aluminum jacket, particularly one that has many jacket penetrations – which is why corrosion to the shell occurred. Figure 1 shows typical corrosion damage found at an insulation support ring.  Support rings are horizontal surfaces designed to provide vertical support for the thermal insulation.  In this case, the ring was welded directly to the shell, which allowed water to accumulate in the insulation on the topside of the ring, resulting in corrosion of the steel shell.

Historically, Eastman has used either epoxy phenolic or multi-polymeric coatings for CUI protection.  In both cases the required surface preparation is abrasive blasting.  Because this distillation column is in service, it was not possible to do abrasive blasting; instead an SP3 power tool-cleaned preparation was specified.  Valentus VSC1100, a high-quality, high build surface tolerant aluminum epoxy mastic coating, was chosen for the first coat because of its outstanding corrosion resistance and excellent tolerance of marginally prepared surfaces.  VSC1200, a top coat with Eastman Tetrashield™ protective resin systems, was chosen for the second coat because of its outstanding resistance to water permeation and excellent chemical resistance. Laboratory testing showed application of VSC1100 to a hot surface had no impact on the curing or properties of the coating.  The hot surface temperature did require the addition of a cure blocker to ensure proper film characteristics for the VSC1200 topcoat.  Figure 2 shows the VSC1100 as applied, and Figure 3 shows the VSC1200 topcoat. 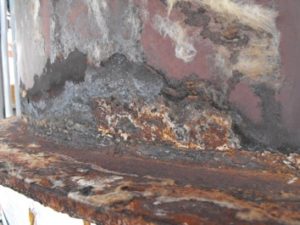 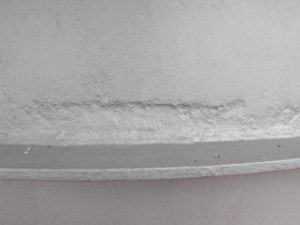 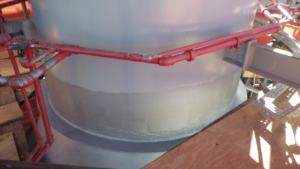 Extensive laboratory testing carried out during the development of both Valentus coatings showed they have individual characteristics that provide each with excellent properties that, when combined, produce a coating system with excellent corrosion resistance.  The Tetrashield resin provides excellent resistance to water permeation and resistance to many aggressive chemicals.  These characteristics make it very useful in moderate temperature CUI applications where an abrasive blast surface preparation is not possible and in situations where the equipment cannot be taken out of service.

Immersion grade coating systems are chosen for CUI applications because they may be exposed to hot, wet conditions for extended periods.  The high build epoxy systems are only recommended for temperatures up to 60°C in NACE SP0198.  Between 60° and 150°C NACE recommends epoxy phenolic coatings which are considered immersion grade coatings.  However, in cases where the recommended abrasive blast cannot be done, the epoxy phenolic cannot be used.  The Valentus system can bridge the temperature gap between 60° and 150°C given its good moisture permeation and corrosion resistance; however, it is not an immersion grade system and should not be chosen in situations where continuous hot immersion is possible.  The design of the insulation system should be done with CUI resistance in mind to help the coating system function as intended.  For the Eastman project, a moisture resistant insulation was chosen, along with an elastomeric jacket material that is adhesively sealed to itself and to the vessel being insulated as seen in Figure 4.  This combination made it much less likely that water could get to and be held against the surface, thus reducing the need for moisture resistance in the coating system.  The Valentus VSC1100/1200 system with its good moisture permeation and corrosion resistance is a good choice for moderate temperature applications when the substrate is corroded and abrasive blasting is not practical. 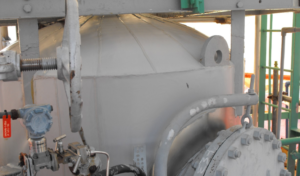