Note: This is the third of a series of posts covering the definition, development and properties of flow efficiency coatings. Click the button at the bottom of this post to download the full PDF.

For years, regulatory agencies have focused on the issue of external pipeline corrosion, sometimes neglecting or leaving aside the question of internal corrosion. Not surprisingly given the harsh environments many oil and gas pipelines operate in, most of the energy has been allocated to preventing corrosion occurring on the outside of pipelines.

Only recently have pipeline owners begun to focus serious attention on problems (and missed opportunities) stemming from internal buildup and corrosion. As documented cases of internal corrosion pile up, the argument for flow efficiency coatings being a sound investment is strengthened. The proliferation of hydraulic fracturing and similar methods of oil and gas extraction only furthers this conclusion. For an explanation of why these methods introduce more corrosive elements than traditional extraction methods, see this post on tank linings in the age of hydraulic fracturing.

Traditionally, internal pipeline coatings have been divided into two groups: those aimed at improving hydraulic efficiency and those aimed at controlling corrosion. Flow coatings, typically applied at a thickness of around 2 mils, were not sufficiently thick to be considered corrosion resistant linings, which are typically around 5 mils thick.

This feature allows 100 percent solids to provide added value as internal pipeline coatings, since they serve both to increase hydraulic efficiency and to fight the sort of corrosion that can lead to disastrous financial and environmental setbacks. 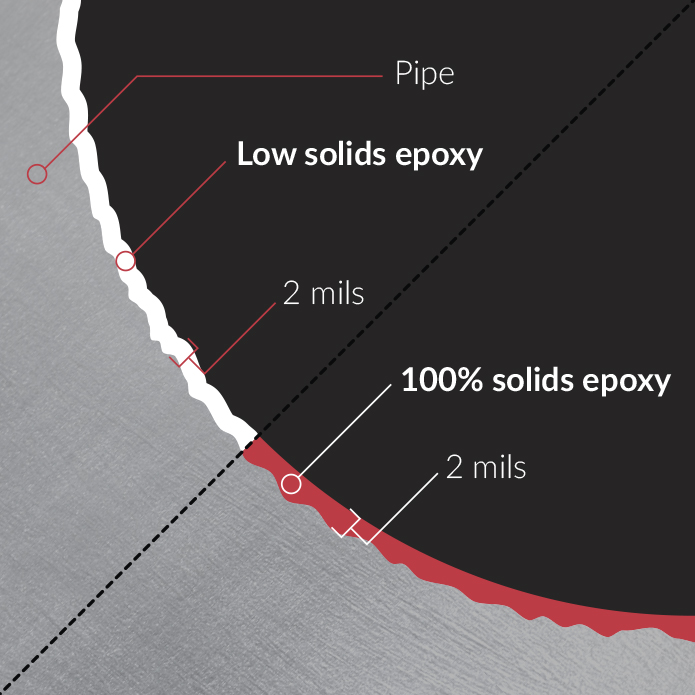 As mentioned in an earlier post, increased attention is being paid to flow rate and instances of internal corrosion. According to a study conducted by the API, corrosion was still the leading cause of leaks by 2012. There were 204 total incidents of internal corrosion between 1999 and 2012. Of these incidents, 31 occurred in portions of pipeline that had intermittent flow and seven in portions that had no flow. In these instances of low to no flow, water is more likely to collect against the side of the pipe, creating the conditions necessary for corrosion to occur.

The report concludes that, while instances of external corrosion continue to be the leading cause of incidents along pipelines, much more has been done to address these external issues. As a result, their rate of occurrence is dropping far faster than instances of internal corrosion.

When the stakes include the costs of a damaged asset, time lost with the asset out of service, leaked material and environmental liabilities, then it stands to reason that internal anti-corrosion coatings justify the initial cost output. If they also combine flow-efficiency properties, their value is all the more certain.