Comparing and testing generic topcoats for exterior use

One of the important factors a buyer considers during the paint buying process is how well topcoats perform during their service.

Also known as weathering finishes, these coatings are designed for ultraviolet (UV) exposure during exterior use. They’re common in any industry that requires equipment or structures to be used or kept outdoors. Topcoats are the first line of defense against the elements, providing protection to intermediate coats which are designed to protect primers.

And it’s important to note right away that there’s no such thing as a coating that doesn’t weather. All coatings fade and break down eventually. With a greater understanding of topcoat formulations and quality testing methods, you’re empowered to make the choice that offers the best protection for your critical assets.

In these tests, UV and moisture exposure is simulated in controlled settings over abbreviated time frames to judge how well coatings stand up to the elements. This is a preferred method for testing and comparing weathering finishes because it’s impractical to rely on real-time field tests that would take years to complete.

However, accelerated weathering testing is an imperfect method that requires strict controls and an understanding that actual results may vary in the field. Consider these practical issues:

Tests conducted on weathering finishes are designed to shed light on a few different things, such as:

Alkyds or oil-based coatings are typically tested in the 250 – 1,000 hour range; most of these coatings sustain significant gloss loss at the high end of this range.

Epoxies lose gloss quickly and begin to chalk after a couple hundred hours of exposure.

Acrylic formulations can vary widely, but they typically hold gloss for between 1,000 and 2,000 hours.

Polyurethanes are even more variable in formulation than acrylics and are commonly tested for several thousand hours. Polyurethane clear coats care often tested into the 5,000 hour range.

Siloxanes and fluorourethanes known as “ultra-weatherables” have shown impressive gloss retention even after 9,000 hours of accelerated weathering testing. 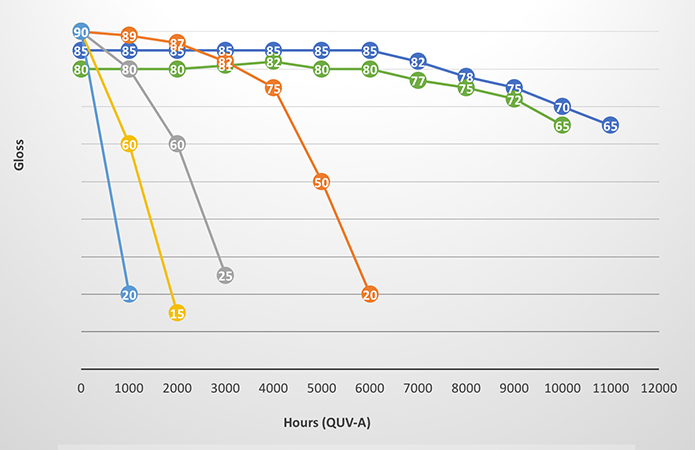 Use the chart below to determine which US Coatings product is the best match for your exposed assets: 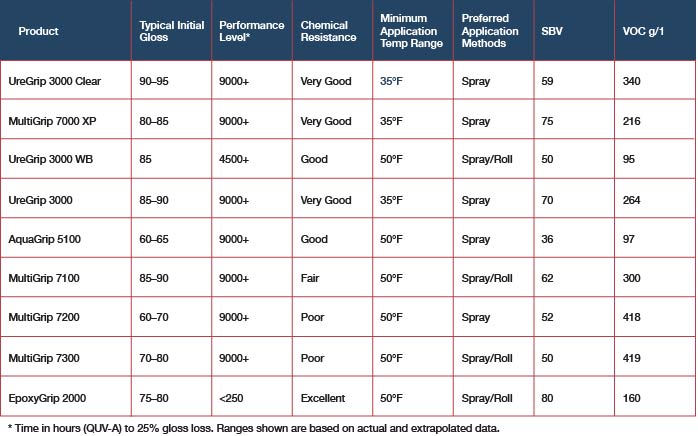 We’re here to help you answer any questions you may have. If you want to talk through your options further, let’s talk. You can also explore our products in greater detail by downloading our product data sheets here.

Choosing the right weathering finish is just one step in assuring your next painting project goes off smoothly. In this guide, we take you through all the elements of a productive —and painless— industrial painting program.