Passive fire protection tends to fall into one of the following three categories: dense concrete, lightweight cementitious and intumescent coating. They are not all created equal.  Recently, cementitious coatings have become less relevant to fireproofing a facility. As technology has progressed, intumescent coatings have superseded earlier methods of passive industrial fire protection as the most successful and cost-effective. Some of the reasons for that are discussed below. 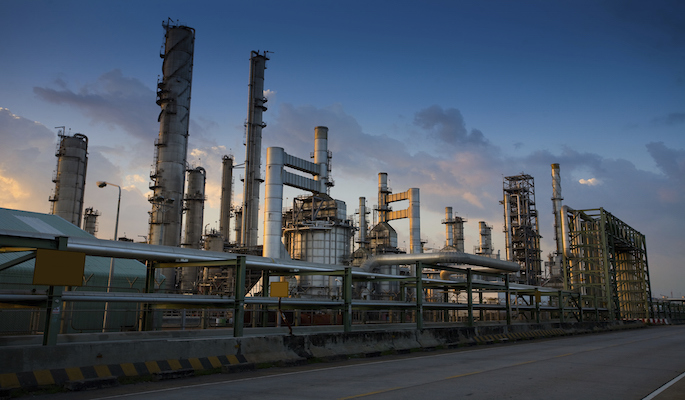 The potential of concrete as a fire-resistant material was recognized long ago. Many refinement facilities constructed prior to World War II made extensive use of dense concrete as a means of protecting against fires. The material is inexpensive and was known to withstand even extremely high temperatures. Problems quickly emerged, though.

Concrete is heavy, which led to the need to over-specify structural steel. It also meant high labor costs, since forming concrete around steel is a laborious, multi-step process. It was also found that rapid cooling following a fire event leads to cracking in concrete and in some severe cases compromises the structural integrity of the material. This damage is sometimes difficult to detect and could become a danger to those working in the facility.

Dense concrete as a means of fireproofing has largely been abandoned in favor of more recent techniques, which offer superior performance and fewer drawbacks.

Lightweight cementitious fireproofing retains the benefit of being based on inexpensive raw materials and without the problems associated with extreme weight. As its name suggests, the material is significantly lighter than dense concrete and so doesn’t require the over-specification of structural steel. But lightweight cementitious fireproofing retains the high costs of labor associated with dense concrete. It must be applied in several successive coats, again driving up labor costs. These products also share their predecessor’s tendency to crack.

Perhaps the biggest liability with a cementitious coating, though, is the inevitable creation of space between the coating and the substrate. This space has a tendency to collect moisture, which in turn fosters corrosion of the substrate. In the long run, this unfortunate flaw can actually cause a lightweight cementitious coating to work against the integrity of the asset it was meant to protect.

Intumescent coatings work by charring and expanding in the presence of extreme heat. The increase in volume and subsequent decrease in density slows the heating of the substrate, increasing the time before the steel itself begins to melt. Intumescents typically swell to 25 times their original thickness when engulfed in flames. This expansion allows them to provide a barrier between the flames and the steel that is exponentially larger than a coating that does not swell.

Adding thickness to an intumescent coating application increases the amount of swelling that will occur in the case of a fire incident. For example, if a 350 mil coating of a given intumescent has been determined to have a fire rating of 1.5 hours, 700 mils would theoretically be necessary to achieve a fire rating of 3 hours. In reality, though, added thickness is sometimes specified in certain areas such as curves and crevices, so something like a thickness of 750 mils may be required in order to achieve a 3-hour rating.

When intumescent coatings come in single-component formulas, they are much simpler to apply than dense concrete and lightweight cementitious coatings and are therefore accompanied by far lower labor costs.

Additionally, since they are applied directly to steel, no gap is created in which moisture can sit and incite corrosion. Intumescent coatings fight corrosion in much the same way as traditional protective coatings, the difference being their ability to swell and the much greater thicknesses at which they are initially applied. With all of the benefits of intumescent coatings combined, it’s our recommended method of fireproofing steel.

Still have questions about fireproofing? Download our fireproofing guide below or talk to a NACE-certified professional today by clicking here.

Fireproofing process facilities makes them safer, but the projects aren’t always straightforward. Get started with this guide to fireproofing your facility.